In Spring of 2015, my son and about 1300 of his fellow undergraduates at MIT participated in a survey conducted by the Healthy Minds Study (HMS). When the final results of that survey were released one year later, the MIT administration took actions specifically focused on the residents of one dorm, Senior House, justifying it by mentioning survey data concerning mental health and substance use issues in the residence.

My son was dismayed to hear of the actions taken, since like other students he had believed the housing data gathered was based on the broad categories asked in the survey such as on or off campus housing, not by specific living group. Although, not living at Senior House, he was not directly impacted by the administrations actions, he stated that if he had known how the data would be used against fellow students he would never have participated.

In the two weeks since we shared with Senior House students our plan for next year, I have received many messages from the MIT community, and stayed in regular contact with student leaders from Senior House, Dormcon, and the UA. I am listening, as I have tried to do throughout this entire process. And I am grateful to everyone for keeping the lines of communication open.

I’m writing because many of the concerns people are bringing to me are based on inaccurate information and a misunderstanding of what brought us to this point. What I find most troubling are the accusations that this is somehow intended as an attack on vulnerable populations or on students’ ability to self-govern. This decision is about one thing: providing every MIT student with a safe environment.

I want to be clear about a few more things…

We have expressed our concerns to the administration regarding the consequences of their plans to repopulate Senior House and adopt the new Pilot 2021 program. We met with Chancellor Barnhart and Dean Nelson to voice our fears that their vision for a “new community” will not preserve the queer-affirming space that has existed in Senior House, and will scatter its LGBTQ population across campus…

The demographic statistics of MIT Dormitories are available below for context. LBGTQ Identifying (%LGB) is indicted on the X-axis; Underrepresented Minorities (%URM) is indicated on the Y-axis. Red lines indicate 25%.

Click here for graph with axes at zero and without quadrants.

The entire front page of this week’s The Tech is filled with stories about Senior House.

Protesters march list of demands on their way to the chancellor’s office. 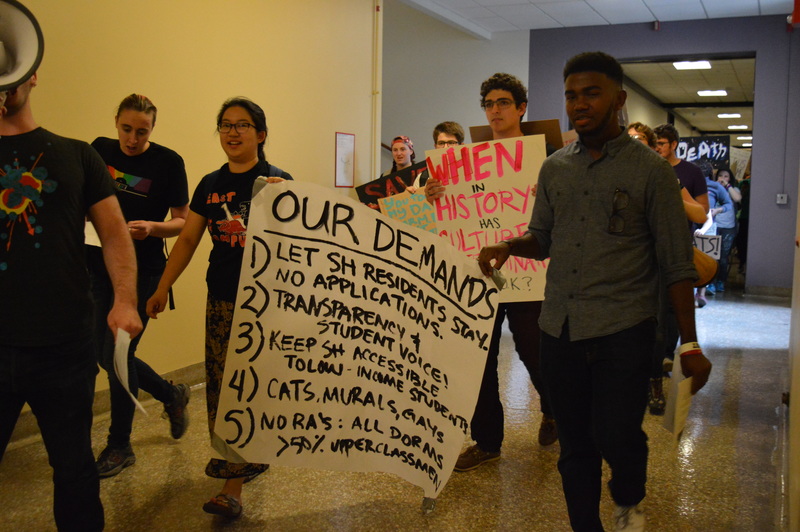 “The Most Innovative prize was awarded to Course 69, also known as the Lambda Sigma Delta girls: Charisse Massay, Eillen Tecle, and Rebecca Maglathlin, whose performance of Destiny’s Child’s “Survivor” pulsed with dynamic energy. “We rocked. We made our own shirts, choreographed the whole thing ourselves,” said Charisse L. Massay ’03. The enthusiasm of their performance was backed by a desire to “represent the east side of campus. There was no representation here from the east, it was all west side. We’re a minority,” said Massay.” The Tech (May 1, 2001).